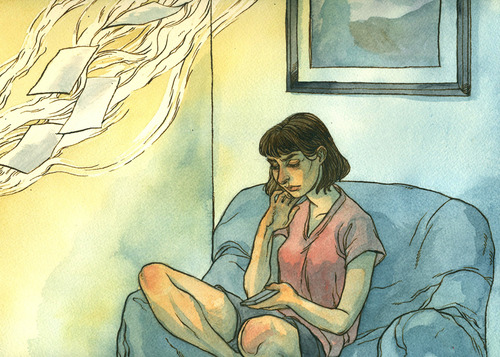 Margot woke up the next morning wearing a t-shirt inside out and backward with a sour stomach. First she remembered that she should probably stop sleeping shirtless, and then she remembered why her roommate had come to visit in the first place  ̶  that nightmare. She could still see those haunting white eyes glaring at her, the pain and the desperation…and the dream before that, it had been even weirder.

She rubbed her flushed face and crawled out of bed. She opened her bedroom door and looked around a while, making sure her roommate wasn’t in, then wandered out and over to the bathroom. A shower  ̶  that was what she needed. That would make her feel normal again. She turned on the hot water and let it hit her extended palm until it eventually reached the correct temperature.

As she pulled her shirt over her head, she saw something just at the edge of her range of vision in the medicine cabinet mirror. Through the transition of the fabric over her face, however, the image was gone. Her eyes lingered there awhile, hesitant, before she slipped out of her underwear and into the shower. The curtain rings moved slowly across the plastic support pole as she tugged it closed, and her environment became a garish coral as light filtered through the tinted plastic.

She closed her eyes awhile and let the sensation of the water running over her skin become her everything. Everything was going to be OK, she told herself. In fact, by looks of things, everything was getting better. Maybe that was why she was freaking out like this, having nightmares  ̶  because she couldn’t let herself enjoy a good moment. She was going to be graduating soon, and she didn’t know where she would be going from there…so the uncertainty of the future was clouding her present.

She shifted the weight from her left foot to her right foot to her left again and rubbed her neck and shoulders with already pruning finger pads. It was going to be all right. For the first time in a while, the things that were on her plate were neatly organized and made sense. She took a deep breath.

Margot knew that sound well enough  ̶  the sound of someone pushing a little too hard on the bathroom door, which had a tendency open without the handle being turned. “Hey, I’m in here, OK!?” she said, opening the shower curtain and glaring at the door. She saw that it was open just a sliver. “Alex!”

Her heart beat began to quicken, and she remembered all of the times that Alex had left without locking the door because she had forgotten her key somewhere or the other. All the possible horrible scenarios entered her head as she reached out to grab her towel before quietly stepping out of the shower. She wrapped herself quickly and padded across the bathroom slowly before she reached the door.

What should she do? Should she swing the bathroom door open boldly? Should she lock it and stay inside. Where was her phone? In her purse, probably dead by now…and her charger was clear across the apartment. A weapon? There was the wine bottle, and she could break it against something…but she wasn’t even sure how hard you had to hit it against a surface to get it to break…

Her mind was racing, and her pulse was picking up to a break neck speed. The last thing she felt before she recklessly decided to swing open the bathroom door and scream for her would be attacker to leave was the heated feeling of the veins in her neck throbbing  ̶

The apartment was silent and still.

Her bravery growing, she walked throughout the entirety of it, grabbing as she checked each room first her cell phone (resting in her neglected purse on the living room floor) and second her charger (which was on her dresser) before she determined that there was no one there. The most reassuring part, of course, was that the front door was completely locked. She let her still wet fingers rest on the metal a moment, physically recording the idea that, yes, no one was inside the apartment with her before she went back to the bathroom.

She locked that door, too, pulled her phone charger into the wall socket above the sink and then the phone into the charger. She watched it click back to life and display the battery charging graphic before she could safely resume what she was doing. The sense of stillness and calm, however, was lost.

An hour later, Margot was clean as humanly possible and sitting in the living room watching the midday news to a cup of cheap coffee. It wasn’t perfect, but it was normalizing. She could still feel the tension in the back of her neck (thinking an intruder in the apartment after having a night-ruining nightmare wasn’t exactly ideal), but she was OK. Really. She took a deep breath through her nose and let it out through her mouth with a sigh.

She made herself focus on what was happening on the television. It was a slow news day, and so she was being made to suffer through the political plans of people who couldn’t possibly run for office for another three years. Over the rim of her coffee cup she watched women with over styled hair desperately try to keep the audience’s attention as nothing continued to happen. The irritation she felt at that was also normalizing. Everything was just the way it was supposed to be.

Her phone vibrated and made a little chirp. She put her coffee cup carefully down on the floor and looked at the illuminated screen. She chuckled to see that he was still entered into her contacts as Professor Smith. She wondered if she should ever change it. “I know I said I would see you in class, but what about we meet up later tonight and catch a movie tomorrow night?” She smiled and typed her response, then hesitated at the send button, deleted what she had written, and wrote it again: “That sounds like a great idea. What movie were you thinking of?”

Margot looked down at the screen awhile before hitting send this time. For the same reason that her first response had been no good, she couldn’t let herself reply too quickly. He hadn’t grow up with cell phones as a teenager, but she was sure he still knew about the unspoken rule of never responding too quickly to a text like that.

She let her eyes drift from the phone to the television  ̶  and without her notice something very peculiar happened behind her. Delicately, and in a way that could not be supported by ordinary air flow, a few stray sheets of paper floated down the hallway and into the living room. Whatever kept them aloft gave them only enough momentum to drift into the first few feet of the room before they gently came to rest on the carpeted floor.

She put down her phone and looked back up at the TV, which proved to be completely uninteresting now that she wasn’t having a slow news day. And suddenly she became aware of the fact that she had become quite cold. She peered over at the thermostat and wondered if her roommate had decided to start turning on the AC unseasonably soon. She got up, mindful of her cup of coffee, and walked around the sofa to the hallway.

As she took a step forward, her foot landed on one of the stray pieces of paper. It slipped out from under her, and she had to grab onto the wall to save herself from slipping.

Margot saw that, had she not stepped on that one, she very easily could have stepped on any of the others  ̶  four in fact. She was momentarily angry with Alex before she looked them over and realized that they were hers. It was the unstapled syllabus from Jason’s class. She picked all of them up and walked over to her room. The door was open. She tried to remember where she had placed them. Had she really just left them out? And how could they have even gotten over there?

She put them down in her bed, shut her bedroom door behind her and walked back over to the thermostat. The air conditioning wasn’t on.

For a moment, Margot lingered there in the hall. The sound of the television was drowned out by the sound of her own heart beat. She was afraid, but she didn’t know why. Everything was just slightly alarming, just slightlyunusual.

She jumped slightly when she heard her phone vibrate. She cast one more glance back at her shut bedroom door and then went back into the living room. “Anything you want, Margot. I just want an excuse to see you again.”