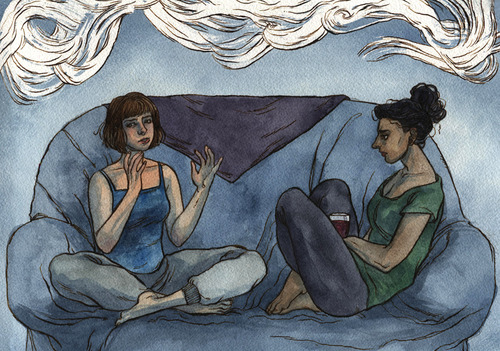 With a clatter, Alex entered the apartment sometime after midnight.

Margot had been home for sometime  ̶  her date with Jason had been pleasant, if a little dull. She had spent the past hour going over every detail, trying to figure out if he were trying to be careful with her or her strange mood had put a damper on things. She had almost told him about her dream, about the strange things she had noticed around the apartment  ̶  she had almost broken into it when she mentioned, with a laugh, that she had found some of his syllabus the day before  ̶  but she knew it was just the sort of thing to drive a person off. If someone she started dating started telling her about weird dreams and phantom noises, she certainly wouldn’t call back…

Margot gestured over to the kitchen, where a bottle of wine sat wrapped in a plastic convenience store bag. She had taken it from the refrigerated section, and it had collected a deal of condensation since had left it there on the table. Alex, without speaking, went over to it and peeled the plastic off the bottle before she thanked her. “You even got the right brand.”

“I’m proud of me, too.” She rested her head against the sofa and thought a while, watching Alex lazily as she put her purse down in her room, then got the one wine glass out of the cupboard and grabbed a bottle opener.

Should she risk telling her? Alex was the kind of person that delighted in weird stories and had a healthy knowledge of the occult…but she was also the kind of person who would so easily get into the things she would hear that she might just make a couple of random happenings into a series of connected events. It was as if Margot were afraid Alex would be toosupportive.

“Alex, I think I’m starting to lose my mind,” she finally murmured.

Alex looked up from the freshly uncorked bottle. “Margot, you juststarted dating.”

“The great Untopping Event of 2013?” She chuckled to herself and began to pour a generous glass. “Yes, that sounds like something that is either a symptom of or a cause of some mental breakdowns.”

“Not just that, though. More. Yesterday I could have sworn someone was in the apartment when I was taking a shower. I heard the door open, and I wasn’t just hearing things  ̶  it was open. And then I looked around to see if there were anyone, but it was empty…but I felt like there was something, someone.” Retelling it, she recalled just the hint of something in the reflection. “I feel there’s someone here.”

Alex came back into the living room and sat beside her on the sofa. She had a knowing look on her face. “Well, the apartment definitely isn’t haunted. It was built, like, five years ago.” She took a sip of her wine. “What else happened?”

Margot shook her head. “I don’t think it’s a ghost.”

“Oh, of course you think it’s a ghost. I mean, do you really want to think that you’re losing it?”

She shook her head, no.

“What else has happened?” she repeated.

“Well…” She paused and furrowed her brow. “The nightmare I had  ̶  the reason I was freaking out… I could have sworn had already woken up from a different dream. There was a woman sitting alone on a park bench. I couldn’t really see the park, but I knew that was one. I feel like I’ve been there before  ̶  like it’s a real place. And I felt like she was a real woman, once. Not just some weird dream mishmash of a person, you know?” She frowned, thought some more. Goosebumps were forming on her arms, and her eyes were starting to water. She remembered the look on the woman’s face, the thickness of the void around them, and the eyes…

“And then…suddenly she was surrounded by these big, horrible eyes. And…” She looked to Alex. “She said something.”

“What did she say?” she whispered.

“And then I woke up. I sat there and I thought the dream, and I felt uncomfortable. I felt like I had dreamed something meaningful, even though dreams are just dreams. I looked up at one point, and in the corner of the room…” She shook her head. “There was this mass  ̶  this undulating cloud of white sticky fog stuff. Like…it looked the top of water just before boils. And I saw a woman, and she…” She paused, put her hand over her mouth and shook her head. “She was reaching for me.”

Alex opened her mouth, about to say something, then closed it again and lifted her glass to take another drink. Neither of them spoke for a while.

Margot made a faint gasping noise as she recalled the woman’s face. Had it been the same woman? She closed her eyes and tried to imagine it…but features that might have been discernible were lost in the monochromatic, white figure that hovered above her…that poured from the ceiling like liquefied desperation. It could have been the same woman in the same way that most people look the same when you poor thick white paint over their faces and blot out the color in their eyes.

Facing the same questions as Margot, Alex asked aloud if it had been, but Margot only shrugged. “I don’t really know.”

Alex took the final drink from her wine glass, stood up and said, “Margot, I think you’re haunted.”

She walked over and poured herself another glass, then, after some consideration, grabbed a coffee mug from the cupboard and poured Margot a glass as well. She brought both back over, handed Margot hers and took a seat again. “What do you think?”

“I…it can’t be, can it? Does that even really happen? Like it’s in movies and sometimes my grandmother with tell me stories about when she was growing up, but… And even if it did happen, why would some random woman I don’t even know decide to haunt me? No one in my family has died recently!” She shook her head. “No, it really can’t be.” To convince herself, she took another drink.

“Who said only your family can haunt you? That’s gross. And the thing about ‘look’? Maybe she’s warning you. As for how you know her  ̶  I don’t know, maybe she was in your class last semester and you just don’t remember what she looked like. Maybe you made meaningful eye contact, and she was so alone she attached to you. Maybe you walked over where her body was buried?” She paused. “Oh, I like that one. That one’s creepy.”

“I’m having a mental breakdown,” Margot insisted. “That’s the only thing that can be happening right now.”

Alex smiled. “There’s really only one way to find out.”