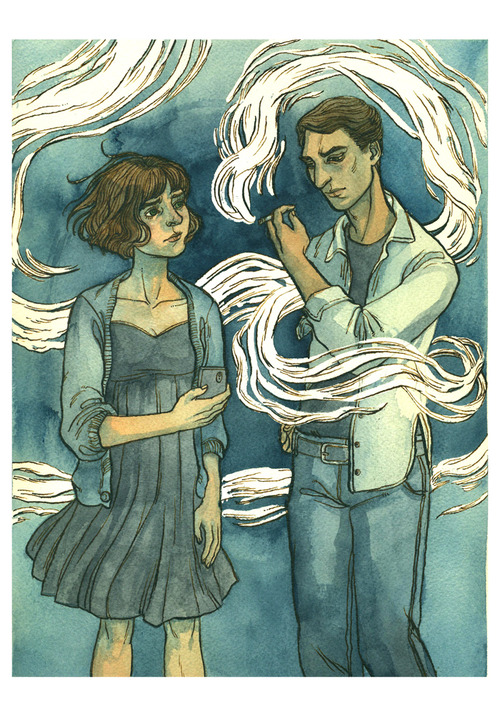 The headlights of his car illuminated a small stand of trees as they pulled into the empty parking lot of the park. It was the only one in town worth visiting, with a well lit water area and a healthy population of ducks and geese that frequented the large pond. A heavily landscaped path encircled the pond, and during the day it would be full of joggers and easy strollers. Tonight, however, it was empty  ̶  save, perhaps, for a lingering vagrant or cigarette smoking teenager.

“Come on,” he said, unbuckling his seatbelt. “Let’s go for a walk to clear your head, and when you’re feeling a little bit better we can figure out what to do from there.”

All Margot really wanted to do was head over to his apartment  ̶  that was the sort of comfort that she really wanted. A cute movie, a shared bottle of wine (and she was sure he drank something better than wine-souring stuff they kept around), a night together, alone. But how does a woman ask for that so early into what they were doing? she wondered.

She unbuckled her own seatbelt and got out of the car. The air around the water was thicker, and if it were just a few degrees warmer she would have been afraid of being eaten up by mosquitoes. She heard the sound of distant car traffic, of someone playing their stereo too loud, but it all seemed to fade into the stillness of the night. She took a deep breath, then exhaled. It was going to be all right.

Jason got out after her, closed and locked the doors and strolled over to her. He took her hand in his and smiled a wide grin. “Let’s go,” he said softly.

They walked awhile, unspeaking, and Margot argued with herself over how to tell him that either her and her roommate were sharing a nervous breakdown or some very serious paranormal activity was ruining her life. Should she even tell him? If someone she just started dating told her something like that, she would bail without a second thought.

She looked over to him and his placid interest in their surroundings. She followed his gaze over to the pond and the inky black cluster of trees beyond it and the reach of the lamps. “This is my favorite place to go at night,” he told her. “During the day it’s just some stupid park full of families and kids and couples. At night, if there’s anyone, it’s probably someone who doesn’t want you to know that they’re there. It’s secretive.”

He chuckled. “Yeah, I guess. I’ve never felt uncomfortable alone at night  ̶  I guess because no one’s ever given me reason to. One day I’ll finally get clobbered over the head by someone and I’ll stop, return to the daylight like the rest of humanity.”

“I used to never go out at night,” Margot said. “But I think now I’m more concerned about things that I can see than things I can’t.”

Her phone vibrated in her pocket. She pulled it out. “Alex (roommate)” it said, and it wasn’t just a text message. She thought about hitting the “Ignore” button, but… She wouldn’t call if it weren’t something important. Not after what had just happened.

“I’m sorry, Jason. I need to get this.” She gestured to the phone and stopped walking, giving him the clear signal to go ahead a bit out of politeness. She waited until he was a few feet away, then accepted the call and said quietly, “Hello?”

“I found something,” Alex led in immediately. “I found something  ̶  I think it’s her. I mean it looks like her, just, you know, with pigment in her skin  ̶  and she’s smiling in the photo. But I think I found her.”

Margot shook her head. “Alex, I don’t want to hear about this right now.”
“I know! I know! I wouldn’t have called if I just found out who I thought it was, because I figured you want to be alone. But then I realized you’re probably with your teacher, and, like, OK  ̶  just hear me out?” She didn’t wait for Margot to say whether or not she were so inclined. “She went missing last year, presumed dead. The title of the article is ‘Promising Student Goes Missing’  ̶  and one of the people they talk to is a Professor Smith  ̶  from your school, Mags  ̶  who was her instructor one semester before and had been dating her for a number of weeks.”

Margot watched him approach a solitary park bench near the edge of the water, glance over to her, then sit down. “…You mean Jason?”

“Yeah  ̶  and they never list a person of interest or anything in the case, because they said that she had been suffering from depression most of her life and had been institutionalized for attempted suicide as a teenager…but, like, you kind of get this feel while reading the article that they thought he might be responsible  ̶  there was just no way to link him to it. They never found a body,” Alex said breathlessly, trying to say the words as fast as possible. “And then I thought  ̶  it all makes sense. This shit started happening the night you went out with him the first time.”

Gut-wrenching cold filled Margot’s body. She numbly watched Jason pull a pack of cigarettes out of his pocket, then light it, then take a thoughtful inhale. There was nothing menacing about this man. He had never made her uncomfortable. He had never mentioned a potentially suicidal girlfriend who maybe killed herself or who maybe he had murdered  ̶  but, to be fair, she had never mentioned that probably the same lady was haunting her apartment. Could this really be what was happening?

She wanted to melt into the pathway and become just a mass of pebbles and dirt and trampled on cigarette butts. She wanted to cease to be, just so that she didn’t have to process this information.

Finally, she whispered into her phone. “That can’t be, Alex. It’s got to be some sort of freaky coincidence.” The smoke from his cigarette caught the light of the nearby lamp and trailed upward into the air in a fine, fingered trail.

“Come on, Margot. Is that the best you can do?”

The wind started to pick up, and Margot’s hair whipped around her face. Her gaze remained fixed on Jason’s figure in the distance. Something about it seemed so…familiar. She started to walk toward it very slowly, the gravel crunching beneath her shoes. “I just…Alex, it can’t be that. He’s such a nice person.”

“He’s your only connection to this woman.”

“We don’t even know if it’s the same woman,” Margot replied, shaking her head. Jason was getting closer now, and her angle of the bench was changing so that it was more head on. She was about to round a bend in the pond, where she would be seeing him more in profile, so she paused at the point before her perspective changed. Yes, from that angle it was definitely familiar…and she knew exactly why.

The dream. It was just like the dream  ̶  the same bench, the same location. There wasn’t a mass of eyes behind him, but the shapes of the shrubbery that were behind him were especially familiar.

Margot was starting to feel weak, and she felt a distinct sensation in her legs; her body was telling her to run in the opposite direction.

“Yeah.” She could feel tears starting to form. She finally had to turn away, her back against the lake, leaving Jason just on the edge of her peripheral  ̶  the wind was starting to blow very hard.

“Have you told him about the ghost or anything. Does he have any reason to suspect you might know?”

“I’m coming to get you,” Alex said. There was a clatter from her end of the line. “Which park is it?”

“The one across town. With the big pond.”

“All right. Margot, you keep it cool for the next ten minutes.” She hung up.

“What were you talking about?” Jason asked suddenly, only ten feet away.

Margot jumped and let out a little bit of a yelp. Her phone dropped to her hand with a clatter. “Jesus Christ, Jason  ̶  you scared the hell out of me!” She pulled her hair away from her face and held it down to the side with one had so that she could see clearly.

“I asked what you were talking about,” he said, unresponsive to what she had said or even her reaction. He walked the rest of the distance over to her, and his figured seemed to loom over her.

Swallowing back another wave of nauseating dread, Margot managed to say, “She just needed me to verify when one of our projects were due. She’s always asking for help.” The lie came easily, and she was relieved to see some of the muscles in his face relax.

He believed her  ̶  and why wouldn’t he? He probably repeated himself that way because he assumed she was having a hard time listening in the wind. And maybe he was jealous because he thought she was on the phone with another guy. There were plenty of reasons for him to react the way he did that, in normal circumstances might be cause for alarm, but in this instance would be a welcome alternative.

Jason smiled very slightly, then said, “Well, it’s a good thing she has such a helpful roommate.”

Her phone vibrated on the ground. She knelt down to the pick it up. As she stood, she saw it was a text message from Alex  ̶  an image was attached. She swiped across the screen, without thinking, to see a smiling photograph of the woman she had seen in her dreams. “She looked so pretty,” she thought before the sound of Jason’s voice cutting through the air weakened all of the willpower that had kept her from running.

“So you know about her,” he whispered.