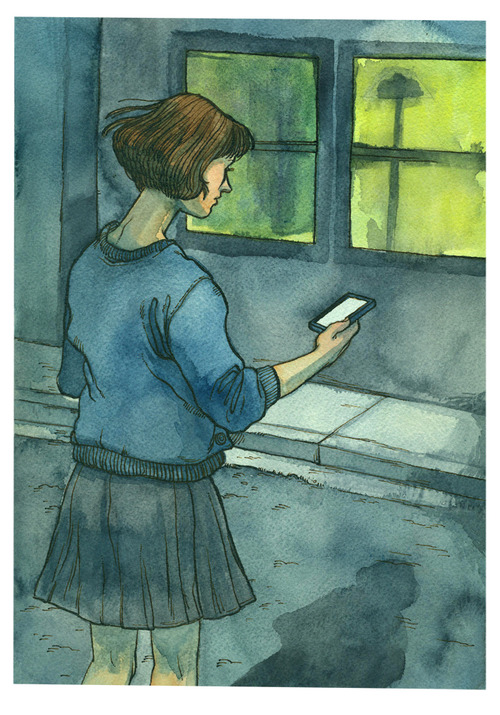 As each car in the distance started out as a single point of light, her heart would start to beat faster with the hope it was finally him  ̶  then the light would separate and form the two pinpoints of headlights, grow in size and eventually pass her, revealing some unknown sedan or truck. People who might have noticed a young woman late at night standing on the side of a low traffic road, her face illuminated by the screen of her cell phone, but none of them ever stopped to make sure if she were OK. It just wasn’t that sort of town.

She knew the smart thing would be to go back inside and wait for him to come  ̶  because he was coming, he had told her so  ̶  but she felt like if she did Alex would con her into flipping through horrible articles about women dying until they finally found the one. And maybe they would; maybe that was a thing that could actually happen. But the thought of it made her stomach turn and her head ache. She didn’t want to deal with it. It wasn’t her problem.

Jason had been surprised to receive a message from her so suddenly, practically begging him to come pick her up. Instead of dancing around each other with text messages, he had immediately called her to ask if there were anything wrong. “I don’t know  ̶  I guess?” She hadn’t the courage to really tell him what was happening. “I just really want to see you. If you can’t, I understand  ̶  but…”

“No,” he had said, his voice so warm and welcoming that she could feel herself melting  where she stood. “Of course I’ll come.”

That had been twenty minutes ago, but it had felt like a solid hour. It wasn’t quite cold outside  ̶  but the wind was blowing, and it was dark, and she wasn’t properly dressed anyway. She felt miserable. She felt like crying, and she would have let herself if the tears would come, but they hadn’t. Instead she just stood there, straining her eyes when a new car came into view, hoping that if she looked hard enough the driver would magically transform into Jason.

Eventually she caught the reflection of light blue in the distance, and as the car got closer she saw it was the right size and then eventually model. She didn’t really let her hopes get up until she saw the familiar glint of his glasses reflecting the yellow street lamps. It was him. He was finally there. He almost drove right past her until he saw her figure beneath the lamp. He pulled to a sudden stop and rolled down the passenger window.

“You were waiting outside?” he remarked incredulously, then moved to unlock the door. “Get in!”

Silently, she pulled open the door and ducked into the car with an indifferent thud. The smell of cigarette smoke hit her, and the remnants of the just-extinguished floated around the car restlessly. “I’m sorry to just impose myself on you like this,” she said faintly, shutting the car door. “I just couldn’t be there anymore.”

He looked up at the apartment, their window amongst many that would remain lit up throughout the night. “Roommate problems?”

She shook her head. “No…I just don’t even want to talk about it.” She lifted her hands, cell phone still tightly fisted in one, to rub her eyes. She sighed. “I’m so tired, Jason.”

He leaned over to her and placed a hand on her shoulder. “Hey,” he said in a soft voice, “it’s OK. We’re going to go get your mind off of whatever’s going on right now.”

Jason sat upright again and took the car out of park. Neither of them spoke as he drove away from the apartment, from whatever had been harassing Margot for the past few days. Her eyes lingered on the building until she had to crane her neck too much to watch it  ̶  then she let her gaze fall upon the street racing ahead of them. “It’s going to be OK,” she thought to herself.