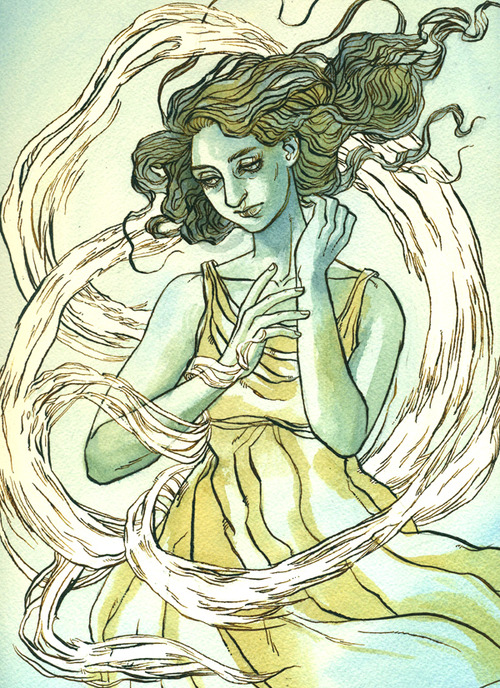 Piercing pain in the middle of her forehead  ̶  she closed her eyes and pushed her face into her palm. A sound like damaged ear drums  ̶  a high pitched ring  ̶  wailed between her ears. It was as if a heavy blast went off beside her. Everything went gray.

In the moment of sensation, she heard only her heartbeat. A steady thump, thump, thump. It lasted moments.

Her lips dragged against her palm as she lifted her face from her hands and looked all around her. There was Alex, her eyes wide, just before her  ̶  and there was… She remembered being a little girl, spending long nights with her grandmother. Sometimes those nights were normal, and nothing happened. But sometimes she would wake up with a start, feeling a sense of urgency. No one spoke, and there was no noise, but she felt compelled as any child would when told what to do and where to go. Those words unheard fresh on her ears, she would rise from her bed and wander  ̶  searching for the source. That was her in those moments, compelled and confused. A wordless directive.

In front of her, the paper was lifted off the table  ̶  held back at first only by the taped edges. The adhesive gave way, and with a soft ripping noise it lifted completely free and hovered steadily as the wine glass twisted in the air. In her detached delirium, Margot noticed that there was still a bit of the glass stained red in the middle where Alex had neglected to wash it out before using it.

She turned to her left, and standing just at the edge of the table was a woman. She was painfully familiar  ̶  a perfect combination of the woman sitting on the park bench and the white apparition that like to torment her in the middle of the night. She wore a simple white dress that billowed all around her and an expression on her face similar to pity.

Her voice was muffled, as if she were speaking through a thick sheet of water, and there was a significant delay between the sounds and the motions of her mouth. She appeared to them as a projection and not truly there. “Don’t you understand what I’ve been trying to tell you all along?”

A sudden energy filled the room, electrifying the air and exciting every molecule. Everything began to glow, to fill with white, to become impossible to see  ̶  and then with a sudden pop, the air had cleared and the room was empty save for the two women.

Alex’s hand darted across the table and grabbed Margot’s. She turned her head slowly, her eyes still wide, and watched deafly as she asked, “Did that just happen?”
She shook her head and worked her jaw trying to equalize. After a few attempts one ear popped and she was able to hear. Her head was throbbing from the experience and the effort, and she felt like she was going to be sick. “That  ̶  that just happened,” she managed. “That’s what’s been happening all week. Only…”

Alex was trying to do the same thing on her side. She shook her head back and forth and tried yawning. “Ow!” she exclaimed, then rested her head in her hands. “Sorry, what? I feel like I just got out of a bad concert.”

Alex stared down at their makeshift Ouija board, which had returned to a stationary position on the table. The wine glass had somehow become upside down, but neither of them were going to discuss the likelihood of that happening. They had gotten to the point where these things just didn’t matter anymore. It happened. What of it?

“I must be going insane,” Alex told herself. She pointed to the spot where there had just recently been a very hard to deny apparition. “There was a woman standing there. She spoke to us. She made the glass move. That wasn’t you fucking with me. That wasn’t me fucking with you. This isn’t some fucking video on YouTube that someone made to look like a ghost  ̶  I saw that. I felt that.” It was almost as if she were angry  ̶  angry that this had gone from a quaint foray into the paranormal, angry that this had ceased to be a cute story to tell friends late at night; angry that it had become a very hard to deny monster.

What were the odds that they had both gone the same kind of crazy?

“Part of me is so relieved that you saw it, too  ̶  the rest of me is terrified of what this means,” Margot replied in a distant, far off sort of way. “What are we even supposed to do about this?”

“Neither do I. Especially not young women. Like if this were some grandma looking woman it would make sense.”

“No,” she agreed, shaking her head, “She couldn’t be related to either of us. She looked Hispanic.”

“She looked, like, solid white and freaky. Where did you get Hispanic from?”

“Remember that nightmare I had? The one with the woman sitting on a park bench? She looked like that ghost thing we saw.” She gestured over to the empty half of the room, where the air still felt…incorrect. She glanced as her hand as she returned it into her general area. The sensation wasn’t pleasant. “I mean, in her facial features and whatever I was able to focus on. I feel like it was her.”

“How well do you remember her face? Well enough to, like, pick it out of a photograph? Maybe she was in the news when she died.”

Before she could answer, Alex was up and headed toward her bedroom. “If we hurry, we can still make it to the library.” Then she paused. “Wait, what am I saying? We don’t need to sift through microfilm  ̶  it was probably really recent. I bet if we start going through all the tragic newspaper stories from the past year  ̶  “

“Wait,” Margot urged, standing up herself. “I mean is this something that we even want to delve deeper into?”

“Are you kidding? Look at what’s happening, Margot. We just spent the past hour having a séance in our living room  ̶  and it worked. This shit is going to keep happening unless we do something to solve it.”

Margot felt panicked  ̶  overwhelmed. Alex wasn’t being unreasonable, and  ̶  given the position she was in  ̶  was doing what anyone who needed a solution to a problem would be doing. She was trying to fix this, even if it might not be the sort of thing they could fix. But nothing felt right. She was overcome with apprehension and dread, as if someone had just discovered a terrible secret about her that she had spent her entire life trying to keep under wraps.

“I can’t be here right now,” she said, then walked into her room, grabbed her things and put on her shoes. She was deaf to Alex’s requests that she stay, and soon she was out the door and into the cool night air.