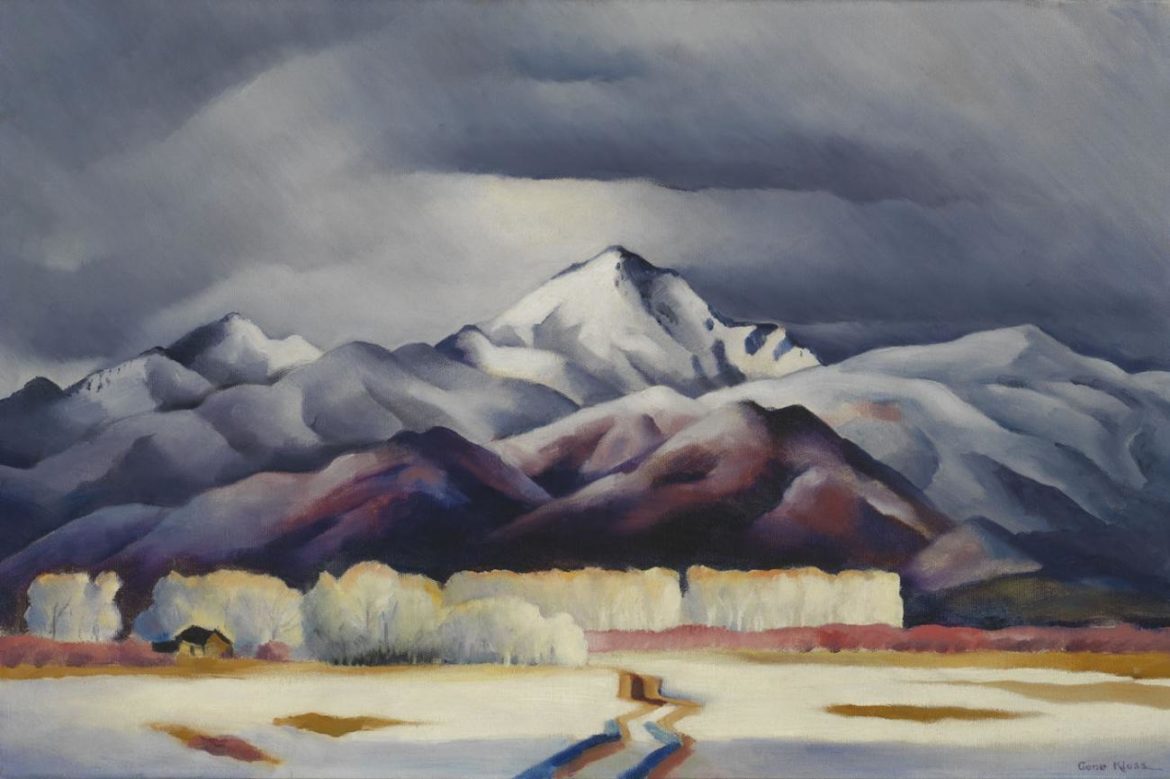 Gene Kloss felt that immersion in nature was essential to the production of art. Her paintings and etchings were directly informed by nature and she couldn’t conceive of making art any other way. “An artist must keep in close contact with nature… in order to produce a significant body of work,” she said, and she was prepared to live by her words.

Taos, New Mexico had no electricity or running water when she first visited the town on a honeymoon camping trip in 1925, and yet, she chose to make it her home. She and her husband, Phillips, built an adobe house where they lived by the light of kerosene lamps and used water carried from a nearby stream.

For more than a century, artists have traveled from across the United States to live and work in New Mexico. Despite, or perhaps because of, the lack of amenities, artists found a source of inspiration in the desert that was worth forgoing modern conveniences.

The dramatic landscape of the southern reaches of the Rocky Mountains and their distance from the bustle of industry captured the imaginations of artists who felt confined by life in major American cities. Georgia O’Keeffe is perhaps the best known of these artists, but there were many who traveled to the southwest to live a life that was inaccessible anywhere else. Our open storage Luce Foundation Center cases 32B and 33A display the work of artists who made their home in New Mexico, often in Taos, in order to enjoy and document the beauty of the landscape.

Gene Kloss painted what she saw. While others used the mesas and mountains of New Mexico to bridge the transition between figurative and abstract imagery, Kloss remained steadfast in her devotion to realism. Artists like Georgia O’Keeffe and Marsden Hartley stretched and molded natural forms to express their individual points of view. Kloss, however, considered abstraction a fad. In her own words, abstraction lacked the “conscious development in the language of art to express the significance of a subject that gives a ‘fullness’ to art.”

Kloss developed a style of etching she called “painting” that allowed acid to bite deeply into the copper plate and create the large areas of darkness, which she used for night scenes. She dug into plates again and again with a dental implement shaped like a small spatula in order to achieve soft variations in light.

Midwinter in the Sangre de Cristos, the work on view in case 33A, is an oil painting, but her distinctive use of light and shadow is evident in any medium. Subtle variations in the gray of the sky give the impression of an oncoming storm. A common theme for Kloss was the insignificance of human creations when compared with the overwhelming scale of nature. The grandeur of the mountains turns the little house at their base into a toy. For Kloss, it was nature, not human enterprise that gave art its true purpose.